I have continued to promise I would come forward with a proposal for how to better manage gauges. In the end, I don’t think killing gauges is the way to go, but calls to try to limit them are sensible.

Below is a proposed framework and some ideas how everyone can think about trying to bring the ecosystem into compliance. I look forward to your feedback, especially around exception criteria.

Criteria for exception include, but are not excluded to:

Exceptions should include a new healthy maximum or a way to compute one based on measurements of the protocol/ecosystem.

How we get there:

Status: to be proposed

Enacting this in Governance:

Recommend that balancer enact snapshot governance to confirm the desired state, and request that all DAOs work to move the ecosystem into compliance.

Each DAO may then handle governance around changes to help bring the system to the desired state according to their own processes and in their own timeframe.

I appreciate the effort you’re putting in here. The two points in the Balancer section are not feasible though I think. Neither the DAO Multisig or the Emergency subDAO can realistically be tasked with temporarily killing gauges then re-activating them, main reason being the overhead required to manage such a thing plus it would create a pretty bad UX for LP’s I imagine.

Forcing a governance vote whenever a pool exceeds 10% of the vote feels like a lot of potential overhead. I can see a future where we have many pools that might break this threshold, most of them probably very good pools, and we’re forced to rally votes to protect them from being killed because they’ve become too successful (?).

On technical side: So maybe it makes more sense for balancer just to set guidance for others to try to follow? If in the future, it turns out that veBAL remains the main source of desired state violations, and these violations are deemed catastrophic to ecosystem health, I imagine someone can figure out a way to deal with it.

On exception governance:
There are currently 2 pools getting over 10% of veBAL. One of them is probably an exception (steth).

Looking back at the history of voting here: 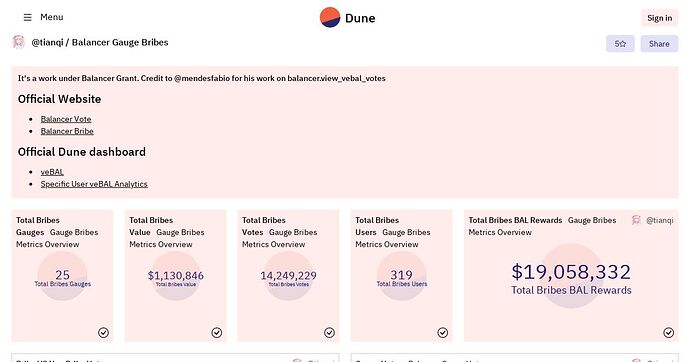 Blockchain ecosystem analytics by and for the community. Explore and share data from Ethereum, xDai, Polygon, Optimism, BSC and Solana for free.

It appears that stETH is the only pool that has actually ever voted with more than 10% of veBAL, excluding events that the balancer community has found problematic. So it seems to me like there would not be so many exceptions nor would they be so frequent. The initial proposal could come up with a starting list, or a framework that auto-excepted.

that is only the case because the CREAM whale controls 30% of emissions. when that changes more pools will reach 10%.

From me there is no guidance to follow really. Going forward we must be very careful about adding gauges that are not likely to generate revenues. Over time as more core pool gauges are added those voters who only vote for non-core pools will be diluted and the problem will solve itself. This is preferred imo over starting a campaign to remove gauges that cannot generate fees but are otherwise legitimate gauges. The enforcement mechanism of this framework will inevitably lead to this outcome from what I can see.

I think any policy that’s based on a set % of veBAL emissions is doomed to fail.
For example, what stops a large veBAL holder from voting for a tokenX/ETH gauge, getting it delisted, trading it along the way, and moving on to the next victim?
Who would want to enter the ecosystem, rely on it for providing sustainable liquidity, and build things on top of it - if their gauge can be removed by a large voter with a snap of a finger?

The proposal is not that gauges were removed if they violated the rules. Read again. The proposal very specifically set guidelines and then asked each DAO to work to find a way to try to maintain them without killing gauges other than perhaps to also reenable them on a schedule to regulate flow.

Yeah that sounds better if the system can just find it’s own way. Cool. Giving it time sounds like a good plan.