Tracer DAO has recently rebranded to Mycelium and expanded its strategic direction as part of a recent governance proposal. Balancer has and will continue to be a significant part of the Mycelium ecosystem. With the Perpetual Pools, Balancer serves as the secondary market for pool token and we are building tools that will leverage BLP tokens to aggregate stable coin and other assets to serve as collateral in Perpetual Pool markets.

Next week, Mycelium is releasing a Perpetual Swap product. The product is a generalised fork of GMX. If you’re familiar with the GMX model you are probably aware of their liquidity token, GLP. Mycelium will be releasing MLP which is effectively a yield bearing index of stablecoins and bluechip crypto tokens that acts as the universal counter-party for leveraged traders. MLP will introduce a number of new assets relative to GLP, one of which is BAL. BAL will be used in the MLP pool to collateralise trader’s long BAL positions, which are executed at the oracle price with no slippage. The MLP pool will also act as an AMM allowing traders to buy and sell BAL. 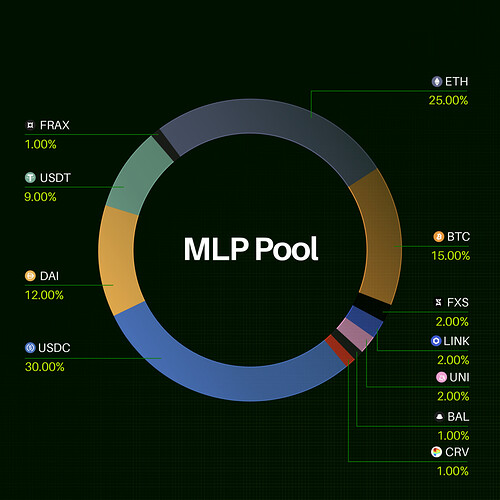 The following proposal is for the Balancer community to allocate a percentage of the BAL held in the Balancer treasury towards the MLP liquidity pool. To provide incentives to LPs, Mycelium will be targeting a 25% APR to LPs for the first month after launch. 70% of fees generated by traders will be distributed to MLP holders. These fees will be paid out to MLP holders in ETH. If the APR derived from ETH rewards is under the targeted 25% APR, the shortfall will be subsidised with escrowed MYC, Mycelium’s native token, that vests over a 6 month period.

The goal of this proposal is to diversify the Balancer treasury, deposit BAL into the MLP liquidity pool and, earn ETH and MYC rewards. As a result, the Balancer community would generate yield on liquid treasury assets. $200,000 worth of BAL would help seed liquidity into MLP to allow traders to go long BAL in an meaningful as we launch Mycelium Perpetual Swaps.

I’m eager to get the discussion going and hear what the community thinks.

Congrats to the Tracer / Mycelium team for making a pivot & launching this new product.

To me the risks here are minimal, with the caveat of trusting the forked code base to be sound. The aggregated oracle approach also puts me at ease minimizing the risk of a single point of failure for the system. The financial implications for the BAL are positive. The deposit would be helpful for us to build up ETH for the treasury, while not selling BAL in the process.

I am in support if no major concerns are brought forward in the meantime.

Hi all, Josh from Mycelium. Been a big Balancer fan for some time now and have met some of the team at ETH Denver.

We would appreciate your support here and think this is a great opportunity to further promote the Balancer Ecosystem. I will be happy to share this out and promote our collaboration on Twitter

All looks good to me. Sounds like you’re requesting a one time deposit of $200k BAL correct? and what would withdrawing these funds look like if/when the time comes?

In support of this proposal.

This would be one time. Potentially this could scale up as the size of the LP pool grow but that is not within the scope of this proposal. In terms of withdrawing treasury assets, that can be done at anytime since funds are able to be withdrawn from the pool at anytime.

I’ve had positive experiences with GMX thus far and would expect the same with Mycelium/Tracer’s product. Adding another market for BAL sounds good to me. Earning return on BAL whilst not selling it sounds great. In favor.

I am also in favor of this proposal. Risk/reward for the requested BAL amount is reasonable.

This is a sound proposal with a safe way to expose the treasury to couple more assets, which is great, esp without having to sell BAL.

I get the reasoning behind not needing an audit, but its better to be safe than sorry. Regardless, we are in favor. Link to the GMX audit too.

Earlier today suspicious activity involving MLP was noticed by the Balancer Maxis from some tweets like this one. The LM Multisig on Arbitrum had retained custody of Balancer’s MLP deposit due to the ongoing rotation of signers in the Arbitrum Treasury multisig (to bring it up to parity with the current DAO Multisig signers).

Thus, the Maxis initiated a withdrawal from MLP into ETH out of an abundance of caution. We have bridged the funds back to Ethereum and returned them to the treasury.