On the 10th of November 2022, “vlAURA” token holders voted for the implementation of a new voting system that could allow Aura to use the entire veBAL stack invested in their Protocol for Balancer Governance voting with a “winner takes all” approach. You can read about it here. Voting results can be found here.

On date 14th of November 2022, shortly after the vote was closed, @Smallcapscience and @Tritium presented a proposal on the Balancer forum to “stop counting vlAURA as part of Balancer governance. Otherwise, Aura votes will be counted twice. Once if/when users vote of Balancer Snapshots, and once when the Aura multisig votes with all of veBAL.”

The Balancer voting result of their proposal however could be read as a rejection by the Balancer Governance of the new voting principle proposed by Aura. It could also be argued that such decision can be attributed to the fact that the Balancer Community does not approve a proposal that favours voting centralization of such a large Protocol which aims at having a controlling stake in Balancer Governance, but instead could prefer a voting system which promotes a more decentralised approach. An approach that leaves space for all the different stakeholders of the Aura and Balancer ecosystem (including, but not limited to, BadgerDAO; GnosisDAO and other small investors like myself) to not only express their voting intentions, but to also have full control of their rationale, which could or could not be aligned with a supposed majority within Aura.

Referring to AIP-17, another critical point of the proposal which should have needed a much deeper discussion, was the possibility of 51% attacks. What has never been considered is that such attacks can be perpetrated by internal actors and not necessarily from the outside. At the time of writing, only a handful of wallets would be able to reach the majority. This risk is especially relevant when @smallcapscience itself states that “For obvious reasons, Balancer holders and Aura Holders are largely the same groups” and that: “Using 100% of AURA’s underlying veBAL to vote through snapshots further decentralises both protocols” (ed: Balancer and Aura). Unless we are all living in an Orwellian novel, there are clear elements that suggest a quest for a centralization of powers in order to then be able to take advantage of directly competing factions through misleading and tendentious statements.

It is evident that Aura has enjoyed strong tailwinds over a somewhat extended period of time: from sustained Balancer awareness campaigns through the main Balancer Twitter account, to a 300,000USD grant, an official “Supported by Balancer’’ acknowledgement on their main landing page, and of course an uncapped gauge since launch. It could be argued that the combinations of all those factors favoured Aura in reaching a predominant position within the Balancer ecosphere.

Aura has now probably reached a mature status, capturing a substantial veBAL TVL and Balancer should applaud their astonishing results.
Taking a disproportionate advantage of such a position however could be seen as unfair when operating within an ecosystem that now hosts multiple counterparties.

To avoid the risk of a centralization of Governance powers as detailed above (a.k.a. winner takes all’’ or “WTA” policies), I propose that any Protocol that hosts/controls veBAL wrappers (auraBAL; tetuBAL; sdBAL) should be allowed to implement WTA policies only up to a certain % of their veBAL market share.

To make this point clearer, the pre AIP-17 model adopted by Aura (leaving vlAURA holders the option to opt in or out Aura delegation) should be seen as the gold standard to be adopted by all Protocols that host veBAL tokenised wrappers, above an agreed floor, as the representation shown below (For reference only). 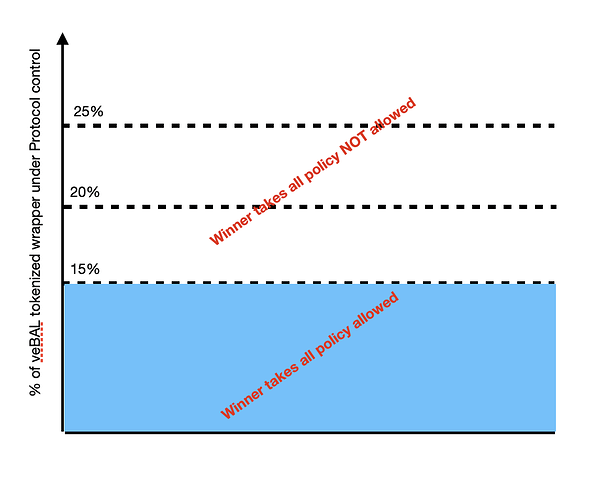 To this end, I propose voting on how high or low this floor should be set at, and I’m open to adding to the proposed values to better reflect Community sentiment.

Proposed multiple choice % values should be set at the following levels:

Above this new agreed floor, a “winner takes all approach” should be prohibited.

The Balancer Governance is requested to express their voting preference on the initiative expressed above by providing one preference among the different options which would serve as a WTA floor.

Why is there a distinction being made here for veBAL wrappers when your main point is to avoid a 51% attack? With that main theme in mind shouldn’t this concept also be applied to any address breaching the levels in your graph?

By any addresses you mean individual addresses? I don’t think this should be the case in all fairness. One thing is an entity willing to control a collective Governance power, another is single wallets interested in making their voice count.

What you propose goes towards the concept of quadratic voting. Which would require deeper thinking but happy to explore it.

i guess more specifically it would be limiting entities, but that implementation is near impossible as the entity can spread their voting power across many addresses. without any type of address tagging it will never be successful. however the point still stands, to me entity vs vebal wrapper is very similar in terms of your 51% concern.

not sure how quadratic voting solves the issue

i am mainly pointing out that i feel that this isn’t a veBAL wrapper issue as you have framed it, there should be more in scope here if the community feels it necessary to head down this path

Interesting that you claim concern around a 51% attack when you own 10%+ of veBAL in a single wallet. We also have no way of knowing how much other veBAL is in your control and voting against Aura’s initiative shows your intentions.

When you consider Tetu’s control and being highly centralized with most of the controlling stake by a few holders, there is also no liquidity for other users to scale in. It makes the protocol as a whole extremely decentralized with individuals like yourself.

Massive red flag when you have someone with such a large stake in veBAL is preventing further decentralization of protocols like Aura.

I’d recommend that votes controlled by entities without liquidity to be properly decentralized to be held accountable. Allowing protocols like Tetu to abuse the system and box out competition should be frowned upon and prevented.

It’s obvious that actors like this aren’t acting in the best interest of Balancer or it’s partners and I’d caution all voters around supporting such a centralized entity. 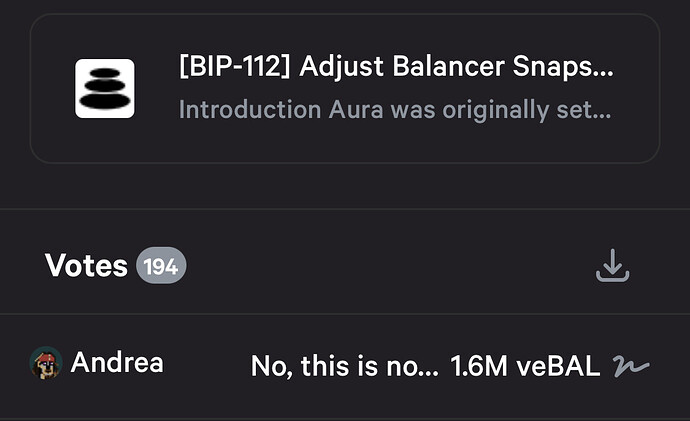 This proposal doesn’t make sense to me and gives exactly the impression of silencing most entities that you actually claim „conspire“ to silence tetuBAL while you yourself control tetuBAL and have all the power as a delegate. Absolutely a move in the wrong direction. I guess it boils down to the fact that theOne and you don’t like WTA voting power by Aura as this could compromise your dominant position?

I would rather try to implement a system where all veBAL wrappers are treated the same way without too many complicated caps. One step is to fix Auras double voting which is underway.

yes, that is correct as I fear that their request for centralisation of power is strictly connected with their desire to cap tetuBAL. Fairly simple concern that nobody has been able to address.

If Aura declares that their voting power won’t be used to cap tetuBAL (specifically THIS proposal) then I would be willing to reconsider this proposal.

Isn’t also Aura trying to box competition? You might have an easier job by asking others to make proposals on your behalf, but the timing of your WTA request is highly suspicious. Wouldn’t you agree?

And to be fair, the “best interest of Balancer” narrative is getting a bit misused and I’m frankly tired of it (“healthy”, “ecosystem”, “builders” to name some others). You are clearly trying to protect the interests of Aura (which is fine) while I simply try to protect the interests of other parties. Isn’t it also fair? Someone said, this is a battle to control the money printing machine of Balancer and is reducing BAL available on the market. Isn’t this also in the “best interest”? Balancer Treasury is 90% BAL overweight.

You might dislike my strategy, but what would you have done if you were on team Tetu?

For the record: by the end of this week (possibly today) Tetu voting power will be delegated to the Tetu Council for Balancer Affairs. After that I will propose to move to a vlAURA model. It might take some time but we will get there.

What will Aura do by then? go back to vlAURA or continue with a WTA approach? Will continue to support for a cap on wrappers? I never get straight answers when I ask the good questions. And this is probably because the word “decentralisation” is an excuse so to execute another plan. Am I wrong?

Be honest and upfront. Show some courage. I would very much respect that.

I somehow someway do not agree. Nothing personal. It seems you are too fixated on Aura’s intentions which were always in favor of the whole Balancer ecosystem.

Aligning intentions & incentives between decision-makers and community members is not just a question of suffrage and accountability. Balancer & Aura should work together for the best of every side. You are saying that ‘‘Aura has now probably reached a mature status’’, and I agree. The ‘‘ecosystem’’ or the ‘‘healthy’’ words you are referring to are true, and Aura was building towards that. You are trying to protect the interest of other parties. Isn’t that a bit centralized on your side don’t you think?

The point is to allow other parties, smaller or bigger, to have a say in governance.

As you are no doubt aware, Aura continues to offer a social aggregation layer for veBAL. This is because the design of the veBAL system means that smaller holders generally need to work together to get the best returns on their LPs. The strength of Aura is in this aggregation of many smaller holders. These small holders are not always well versed in whale games and long term DAO health and governance but they do care about the future of the DAO. Enormous holders however, are able to vote with a single delegate and this undermines the many smaller holders and thus concentrates voting. In other words, a whale with much less than 50% can still exert undue control over governance and emissions by simply always voting en masse (and at the last minute). What Aura is seeking to do here is to actually provide a voice to the many small holders who may or may not wish to follow the complicated world of Balancer governance.

One thing that is certain is that small players in the Aura ecosystem do not want to see Balancer taken over by a single entity and thus Winner Takes All voting provides the best possible means of protecting their long term interests by maximising their voting power.

This seems more like a conspiracy than a proposal to me. It is clear that the goal of Aura is to aggregate votes of small veBAL holders like me to increase yields on my LP position in the Balancer ecosystem which will be beneficial to the entire ecosystem. i will always subscribe to the idea that “every LP matters” and Aura is helping me do just that, I see no reason anybody would want otherwise. This proposal doesn’t sit well with me and I’m afraid I have to disagree.

Based on recent voting the idea that “every LP matters” doesnt hold. This proposal seems like an attempt to only strengthen the interests of a singular party. Democratic like process be damned, pay to play is more like it.