Similar to BIP-3 that is allocating liquidity to Multichain, I think it would be good treasury management to add more liquidity to Aave markets on Ethereum & Polygon.

This liquidity would have an added bonus of earning Aave which could help in diversifying treasury on the long run with very few downside considering the longevity of the deployments of the smart contracts.

Treasury is currently sitting at around 5.4m BAL idle, I think a range to decide here is what make the most sense specific amount would then be supplied to both markets on Ethereum & Polygon.

Thanks for the proposal @0xMaki. Just to put things in perspective a little, the winning vote right now is 100K which if i’m reading correctly would mean 200K of BAL in total. That is around 3.7% of the current BAL in the treasury. One positive is that we should be able to pull back the BAL whenever (no lock up period or similar), as long as the contract isn’t compromised ofc.

That is correct and in theory there is no lockup nor special condition in case there was a better way of deploying the BAL tokens.

I think this is a good and low risk idea to generate some revenue in a non-restrictive way, fully support this

We have discussed depositing into AAVE before and generally the consensus was that the rates were not high enough to justify just farming more bal. But now that the rates are significantly higher, it makes much more sense for us to follow through on this.

One thing I’d like to point out is that the polygon market only has 30k bal supplied to it with a 3% supply apr currently. We will decimate that rate with even a 50k deposit so for that reason I suggest against depositing equal amounts on each network. I would rather have it weighted 2:1 mainnet polygon. We aren’t even getting AAVE rewards on polygon, so its not really worth the risk to get <1% returns on bal. Obviously analyzing risk is a tricky subject but I think its a safe assumption that any strategies that involve nonzero bridge/smart contract risk are not worth if the return is less than 1% yearly.

I personally would be in favor of 75k BAL mainnet and 25k BAL polygon.

EDIT: Woops, I was looking at the v3 market which has 30k supplied with 3% supply apr. The v2 polygon market has 44k supplied @ 69% supply apr. I think this changes what I said above, since there will still be a decent apr with a sizeable deposit. I’m still in favor of weighting mainnet higher but looks like polygon has more capacity than I thought.

I agree with the reasoning and think 100K (200K total) is the right amount to start with.

If there are better returns to be made by putting more (or less) on Mainnet, I would be in favor of a ratio between the two chains as suggested by @Mike_B

I’d like to see the community run some analysis on what effect depositing could have on borrow rates and how that might benefit whales like 0x36cc, since borrowing BAL has been part of their veBAL accumulation strategy.

This is a very interesting proposal. There is strong borrowing demand for BAL due to the ability to earn yield on it via veBAL, bribes and auraBAL. The chart below shows the lending APY for BAL, CRV and CVX which have similar qualities.

If Balancer DAO was to deposit BAL into Aave, then it is reasonable to expect Users will borrow this BAL to earn yield, maybe auraBAL. Balancer DAO will receive yield in the form of aBAL that will accrued over time. Once all the aBAL is redeemed for BAL, it would have the same affect as a market buyback as Balancer DAO has acquired BAL on market which is an interesting thought.

Something to consider is injecting a lot of BAL liquidity into Aave Balancer DAO will essentially become the swing liquidity provider in the lending market. Balancer DAO can then add or remove liquidity to influence the lending APR. The assumption is Users borrow the BAL and deposited into auraBAL which is yield 27.6% in BAL + AURA + bb-a-USD or other use cases like harnessing yield from bribes. If the liquidity from Aave was removed to quickly, then it may trigger borrowers to buy up BAL to repay the debt as the borrowing cost could moon. There is also the risk, that a lot of the liquidity is borrowed and the position can not be fully redeemed at once.

I tend to like the idea as there are two aBAL whales on Ethereum that would have a larger position than Balancer DAO. On Polygon it is a lot more risky as this would over double the size of the BAL liquidity on Aave v3 and this has the potential to be a difficult position to unwind. I would be more cautious on Polygon. May I suggest perhaps focusing on Ethereum initially, maybe 75k BAL and this would place Balancer DAO as the third largest liquidity provider. 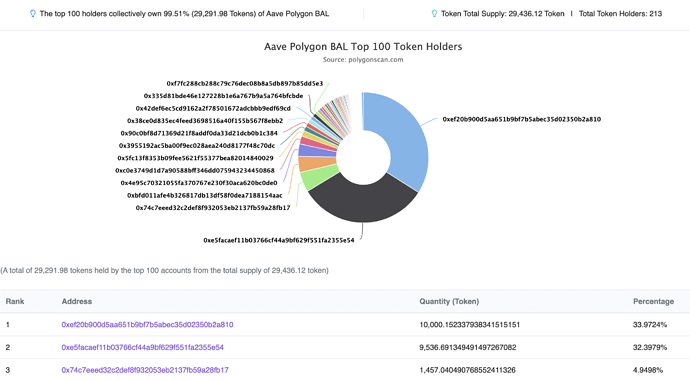 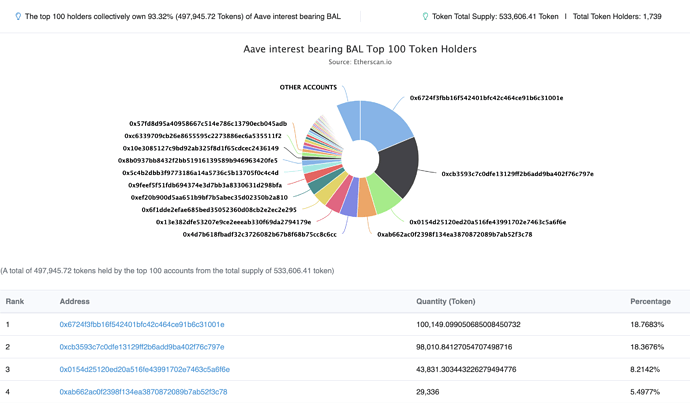 Other posters have provided analysis for risk appetite, deposit size, and others, so I will give a brief response.

I believe it is much safer to go with a weighted option since Mainnet and Polygon pools are very different. A fair split could be around 75-85k on mainnet and 50k on Polygon.

Polygon has a high APR but as mentioned, it presents some issues in removing assets, so we shouldn’t deposit too much right now.

0x36cc is borrowing BAL again. Looks to me like there’s a good chance they’d simply borrow whatever amount the DAO supplies? If this proposal goes to a vote I would like to see this added to the risk section of this proposal. I might be missing something but I don’t think the benefits outweigh the cost’s expected value.

From what I can tell from that address’s history (in regard to BAL) is that they borrow BAL, but don’t use it for anything in particular, typically repay the loan shortly after. It would appear they are hedging themselves for some events they think may happen. Doesn’t mean their actions can’t change though I guess.

Don’t see anything wrong there ? Meanwhile the Aave market on polygon is still at over 40%+ APY